The economic impact of global sanctions placed on Russia following the country’s invasion of Ukraine, will decelerate the growth of the country’s life insurance industry over the next few years, found GlobalData. According to the leading data and analytics company, life insurance gross written premiums (GWP) in Russia are expected to decline by 7.3% in 2022 compared to the 21% growth achieved in 2021.

GlobalData’s latest report, ‘Russia Life Insurance: Key Trends and Opportunities to 2026’, reveals that life insurance GWPs are forecasted to record a low compound annual growth rate (CAGR) of 3.1% over 2021-26 compared to the 11.5% CAGR seen during the period 2017-21. 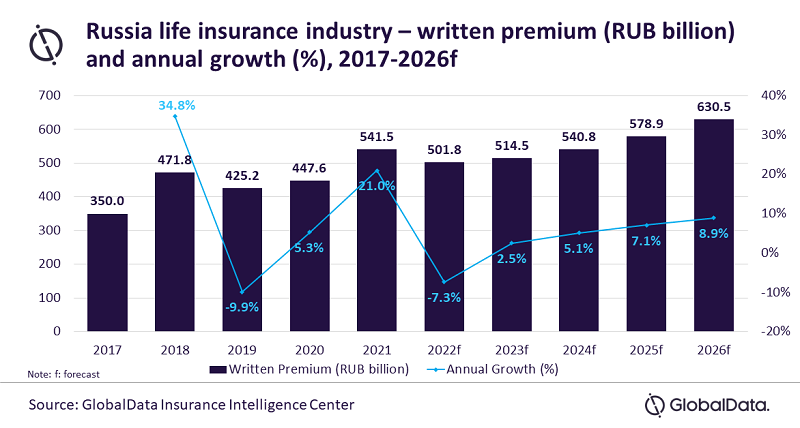 Katam Prasanth, Insurance Analyst at GlobalData, comments: “Russia is one of the few countries where the life insurance segment recovered quickly from the impact of the COVID-19 pandemic. However, as a result of the country’s invasion of Ukraine and the consequent imposition of heavy sanctions, Russia’s economy and its insurance industry has been significantly impacted with high inflation and worsening trade and economic conditions. GlobalData estimates that Russian GDP will contract by 12.3% and inflation will remain above 15% in 2022.”

To curb the country’s high inflation the Central Bank of Russia (CBR) first increased its benchmark interest rate to 20% in February, and then reduced it to 8% in July as inflation eased due to a strong Ruble. Higher than expected interest rates have made bank deposits more attractive compared to investment-linked life insurance (ILI) products, one of the major drivers of life insurance growth in the country. Furthermore, restrictions on investing in foreign bonds due to sanctions has led to a decline in demand for ILI products which is expected to continue into 2023.

Prasanth continues: “As a result of all this market disruption, M&A activity is expected to increase as insurers investment opportunities are limited and smaller, with less capitalized companies predicted to merge with the larger players in order to stay afloat.”

Many foreign insurers have announced plans to exit the Russian market altogether. Prominent amongst them is Generali who closed its representative office in Moscow, withdrew from Ingosstrakh where it owned 38.5% of the shares, and closed down its Russian division of Europ Assistance. Allianz Group has also announced plans to sell its Russian operations to Zetta Insurance.

Prasanth adds: “GlobalData expects Russia’s life insurance industry growth to remain subdued over the next few years as further economic and disruptive headwinds are anticipated resulting from the Ukraine conflict.”

Home improvment, Real Estate and Contractor
We use cookies on our website to give you the most relevant experience by remembering your preferences and repeat visits. By clicking “Accept All”, you consent to the use of ALL the cookies. However, you may visit "Cookie Settings" to provide a controlled consent.
Cookie SettingsAccept All
Manage consent