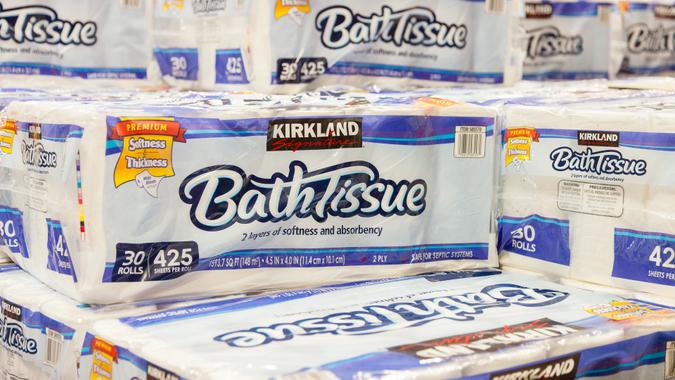 Costco is the place to go for anyone who wants to stock up on bulk items, prepare for a party or big event, and save money while doing so. The buying in bulk mentality, however, can often lead people to purchase items that ultimately aren’t worth it; either because you can’t possibly use all of what you’ve purchased, or it can be cheaper somewhere else.

Advice: 9 Bills You Should Never Put on Autopay
Learn: This Credit Score Mistake Could Be Costing Millions of Americans

Bonus Offer: Open a new Citi Priority Account by 1/9/23 and earn up to a $2,000 cash bonus after completing required activities.

Here we take a look at nine of Costco’s Kirkland Signature brand products that you might want to rethink purchasing, because they may not be worth your hard-earned dollars.

Anyone who cooks a lot will know the allure of a big, beautiful tub of your favorite spices, even just simple pepper or Kirkland’s organic no-salt seasoning. But if you notice that most spices come in tiny little jars, that’s not just to gouge you on price — it’s because spices don’t last forever.

According to the spice company, McCormick, dried spices in jars last, on average between 1 and 4 years. So if you buy yourself a huge container of spices, no matter how good the deal is now, chances are you’ll never use up the whole thing and will wind up losing money in the long run.

Gluten-free baking is all the rage these days, as people become more aware of food sensitivities or just like to try new things. Thus, it would seem like Kirkland’s three-pound bag of gluten-free almond flour, for $13,99, would be a steal.

Cash Back Offer: Get cash back on groceries with a picture of your receipt. Sign up now and get a $20 welcome bonus.

The problem is, almond flour lasts only a few months past its sell-by date, according to Does it Go Bad, and up to a year in the freezer at most. Are you really going to bake that many items with almond flour? Probably not.

Take Our Poll: Are You Struggling To Keep Up With Your Utility Bills?

Costco makes it super easy to prepare for a party, particularly when it comes to beer, wine and spirits. Who wouldn’t want to take home a nice big bottle of Kirkland’s Tequila Añejo to live it up?

According to MoneyTalksNews, however, the spirits that make margaritas so tasty apparently taste pretty subpar at Costco. One reviewer said the tequila has, “an unnatural sweetness like it does not come straight from an agave field or distillation,” and another went even farther, saying, “It’s like wearing clown shoes or something. It’s out of place.” So save yourself the money and dissatisfaction by skipping this one.

Of all the things to buy in bulk, diapers have got to be at the top of the list. Babies go through diapers faster than they grow, and that’s saying something. Naturally, it makes sense to buy your diapers in bulk, which surely translates to a good deal.

Free Samples: Get free samples by mail. You tell us what you think. No catch, no credit card required! Choose your free samples from PINCHme now.

However, according to Natural Baby Life, diapers at Costco are not the cheapest diapers around. That award goes to Walmart instead.

Cheaper is not always better, and while Kirkland has many highly rated products, unfortunately its gel dishwasher detergent is not one of them. According to Consumer Reports, it turned up as one of the lowest-rated detergents. This is one product where it’s likely worth it to buy a name brand competitor for a little bit more instead.

Coffee lovers rejoice when they run across big containers of tasty grounds, and Kirkland does indeed offer coffee in bulk. The problem is, according to MoneyTalksNews, coffee doesn’t have great lasting power.

Coffee snobs would say you should only grind your beans the day you want to drink them anyway, so pre-ground coffee is already halfway to stale. Therefore, be realistic about how much coffee you’re actually going to drink, and put the Kirkland brand back.

Anyone who hoarded toilet paper or tissues during the pandemic from Costco probably got a very painful lesson that this wasn’t money well spent. According to Reader’s Digest, these paper products for our most sensitive areas score very low on ratings for traits like durability and softness

Moreover, of all the products that can go bad quickly, dairy products are high on the list. It might make more sense to just buy your milk one regular-shaped jug at a time, looking for deals from your local supermarket.

Like milk, deli meat has a pretty short shelf life once opened. In addition, chef Lizzy Briskin with Insider rated products she would never buy at Costco, and one of them was Kirkland brand pre-sliced deli meats.

She suggests you’re better off buying fresher, smaller amounts of deli meat from your local butcher or grocer, where you can get exactly as much as you need and won’t waste any.

Technology, Programming, Computer and Gadget
We use cookies on our website to give you the most relevant experience by remembering your preferences and repeat visits. By clicking “Accept All”, you consent to the use of ALL the cookies. However, you may visit "Cookie Settings" to provide a controlled consent.
Cookie SettingsAccept All
Manage consent