When C3.ai (AI 3.36%) went public on Dec. 9, 2020, it generated a lot of buzz for three reasons: It was growing rapidly, it was founded and led by tech veteran Tom Siebel (who sold his previous company, Siebel Systems, to Oracle), and it had a catchy ticker symbol. Those factors, along with the buying frenzy in growth and meme stocks, propelled C3.ai from its IPO price of $42 to an all-time high of $177.47 less than two weeks later. But today, it trades at about $13 a share.

The bulls ditched C3.ai as its valuations peaked, its revenue growth cooled off, and its losses widened. Rising interest rates exacerbated that pain by driving investors away from pricier growth stocks. But could C3.ai stage an unexpected comeback this year? Let’s review the three top reasons to buy C3.ai — as well as three compelling reasons to sell it — to decide. 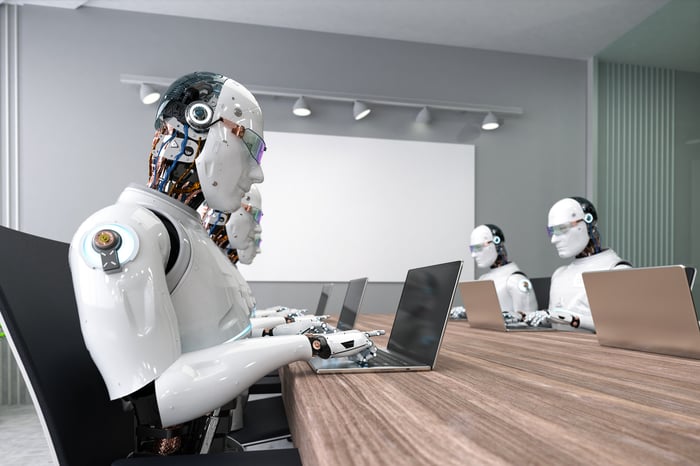 The three reasons to buy C3.ai

C3.ai develops AI algorithms that can be integrated into an organization’s existing software infrastructure to automate tasks, improve employee safety, cut costs, and detect financial fraud. It provides these services as both plug-in algorithms and stand-alone pre-built services. The bulls are sticking with C3.ai for three reasons: It’s still gaining new customers, it expects its revenue growth to accelerate again, and its stock looks a lot cheaper than it did at the height of the meme stock rally.

C3.ai ended the second quarter of fiscal 2023 (which ended last October) with 236 customers, compared to 228 customers in the previous quarter and 203 customers a year earlier. It secured new partnerships with the U.S. military, Alphabet‘s (GOOG 5.72%) (GOOGL 5.34%) Google Cloud, and Microsoft (MSFT 3.57%) over the past year.

As for C3.ai’s revenue, which is only expected to rise 1% to 2% in fiscal 2023, Siebel predicted during its latest conference call that it could “return to a growth rate of greater than 30% year over year within the next 18 months.” It expects that momentum to return as the macroeconomic headwinds wane and large organizations ramp up their software spending again.

At its all-time high, C3.ai’s enterprise value reached $16.7 billion — a whopping 91 times the $183 million in revenue it would generate in fiscal 2021. That nosebleed valuation was clearly unsustainable, but the stock now has an enterprise value of just $491 million — less than two times its projected sales for fiscal 2023. Less than 8% of its float was also being shorted as of Dec. 29, so the bears don’t expect it to drop much further in the near term.

The three reasons to sell C3.ai

C3.ai’s stock looks a lot less bubbly now, but its customer concentration issues, its abrupt transition from subscriptions toward usage-based fees, and its shrinking margins all suggest its business is still in serious trouble.

C3.ai generates nearly a third of its revenue from a joint venture with the energy giant Baker Hughes (BKR 1.90%). That partnership will expire in fiscal 2025, and there’s no guarantee it will be renewed. Baker already reduced its annual revenue commitments to the joint venture through two renegotiations with C3.ai in 2020 and 2021, and it sold off about 15% of its equity stake in C3.ai last year. The uncertainty regarding C3.ai’s future with Baker will likely keep the bulls away — even as the company secures fresh partnerships to offset the potential loss of C3.ai’s revenue.

As for its business model, C3.ai initially used a subscription-based model. But last August, C3.ai said it would pivot toward a usage-based model, which only charged customers for the services they accessed. Siebel claims this change gives it more flexibility as large companies rein in their spending to cope with the macro headwinds, but it will also likely reduce its revenue per customer and the stickiness of its ecosystem. That’s why investors should take Siebel’s forecast for a return to 30% growth with a grain of salt — especially after it repeatedly reduced its guidance for fiscal 2023 over the past year.

Meanwhile, C3.ai’s gross and operating margins are both headed in the wrong direction as it leverages more promotions and trials to lock in customers. That’s why analysts expect C3.ai to stay deeply unprofitable for the foreseeable future. 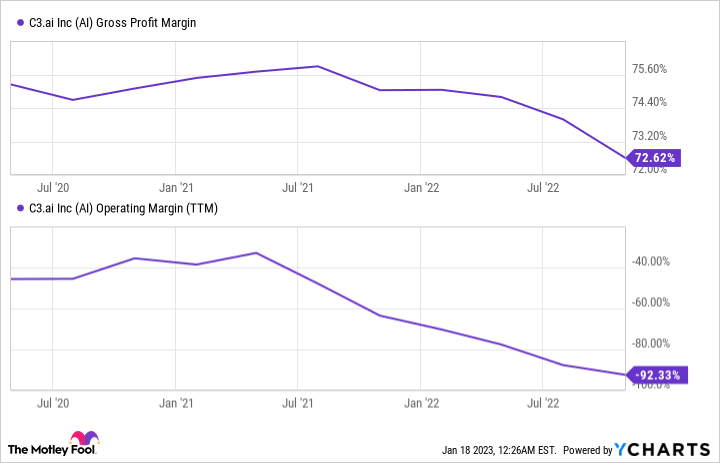 The risks outweigh the potential rewards

C3.ai isn’t doomed yet, but the bearish thesis makes more sense than the bullish one. Unless it can overcome the macro headwinds, renew its deal with Baker, and stabilize its margins, there’s no reason to think it’s a bargain at these levels.